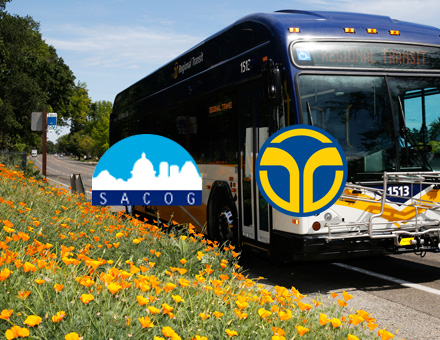 December 7, 2017 – Transportation planning efforts just took a huge step forward today, thanks to the award of a $492,000 grant to the Sacramento Area Council of Government (SACOG) in partnership with the Sacramento Regional Transit District (SacRT). SACOG and SacRT plan to work together to integrate transportation and land use planning to optimize transit and transit-oriented development throughout Sacramento, Citrus Heights, Folsom, Rancho Cordova, and urbanized Sacramento County. The two agencies provided a combined local match of $202,000, bringing the total project cost to $694,000.

“We are very pleased over the news of this grant funding as it demonstrates to the communities we serve that SacRT is continuing with its transformation to become a world-class transit system,” stated SacRT Board Chair Andy Morin.

SACOG’s Vice Chair Jay Schenirer, also a member of the SacRT Board of Directors, sees this collaborative effort as a beginning to a new future transit system for all of Sacramento.

“We are thankful for the support that SACOG provided to help secure the grant award. This successful partnership is an excellent example of the renaissance of SacRT, as it seeks to become a collaborative economic force in the region.”

“This is simply the next step in our transformational process,” stated Henry Li, SacRT General Manager/CEO. “Our great team of transit professionals is dedicated to the vision of developing a state-of-the-art service that exceeds the expectations of every community within the Sacramento region. We are excited to begin the new design process thanks to this funding award.”

The Caltrans planning grant also includes funding to develop an interagency framework to guide future Transit Oriented Development (TOD). The framework is intended to help coordinate planning and development efforts between SACOG and SacRT, along with the County of Sacramento and local cities. The overall project seeks to increase the reliability and efficiency of SacRT’s transit service while reducing greenhouse gas emissions and increasing transit oriented development to improve livability and quality of life for riders and residents.

“Transit is a key driver for local and regional economic opportunity for all. But that depends on current and future riders having high-frequency bus and train service,” said SACOG CEO James Corless. “This grant will help SacRT build that future system that the entire region can rely on and be proud of.”

Running from January 2018 to February 2020, the project will position SacRT to optimize its transit network, increase first mile/last mile connections, and enhance opportunities to live and work near transit. The project will deliver a Route Optimization

The grant award will also fund the purchase and installation of innovative planning software known as Remix. The proprietary software helps transit agencies design routes while identifying cost and demographic impacts associated with proposed changes. The software is expected to save SacRT time and money heading into the future. Caltrans intends to issue the grant funding in January 2018.