Not just a transit agency – SacRT offers an innovative new helping hand to Sacramento community’s most vulnerable residents. Here’s an inside look at that creative effort.

This is the first of several articles and videos we will publish in the coming months offering an inside look at SacRT’s expanded efforts. Our hope is to encourage more awareness and support for creative approaches to solving Sacramento’s problems. 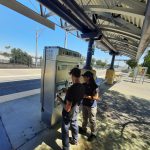 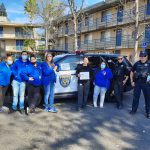 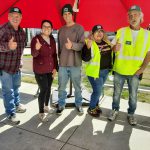 The limited capacity of housing and other social service programs in Sacramento County has forced many individuals experiencing homelessness to look for shelter in various public spaces, including in and around train track rights-of-way, which is very unsafe. Without other options, many also turn to transit vehicles, bus stops, and transit stations for shelter. The pandemic has only exacerbated these struggles.

It’s a warm Wednesday in June. One of SacRT’s newest and unusual workers jams water bottles into her backpack, hoists it over her shoulder and heads on foot down a rocky embankment near Folsom Boulevard. Ahead, tucked in the shade near the light rail tracks, is a homeless camp. The row of tents perches a few yards west of Tiber Station.

“Hello!” Rose Arteaga calls at the first tent. “This is Rose from SacRT. Are you doing OK?” A grizzled man in a 49er’s jersey grunts hello. But he won’t open the tent flap. She offers him water. No thanks, he says, “I’m OK.”

Arteaga may be one of the most cutting-edge public transit employees in the country. She is SacRT’s first full-time social worker, hired last year to expand the transit agency’s role in the community at a critical time.

She comes with a master’s degree in social work and an expertise in dealing with vulnerable populations, many who live on the streets. Arteaga realizes this man, whom she has met before, is too proud to accept bottled water for himself.

“How about for your kitties?” she asks. The man has 10 cats in his tent. Arteaga sometimes sees them walking near the tracks.

“OK,” the man says. She places two bottles outside the flap. “See you later,” she says, and heads down the Gold Line.

Maybe next time he’ll chat with her, she says, allowing her the opening to coax him off of the streets. That is the goal.

Planting seeds along the rails.

Arteaga’s morning visit to this tent camp is part of what have become weekly rounds for her as she and SacRT continue to define her job. She typically starts her week by heading out to check out reports of issues on the system, often regarding loiterers, from riders, agency employees, residents, or businesses.

If people are loitering too close to stations and bus stops, she or other transit officials will tell them they have to move. But she will spend time with them if they let her, asking them about their lives, getting a sense of who they are. She will tell them about emergency and transitional shelter programs or counseling services or addiction programs. She’ll arrange to bring representatives out to meet them. She may hand out some food or clothes from the back of her SacRT vehicle, or offer them a few bus passes, if needed. If they aren’t ready to accept help today, she’ll be back.

“Nobody is going to just jump out the first day and say, ‘Take me!’ So, we plant seeds,” she explains. “We keep watering those seeds by visiting and saying I’m here whenever you are ready. When they are ready, they know ‘I can call Rose.’

Arteaga initially joined SacRT as an intern from the Sacramento Police Department, where she worked in the police social services detail. Her work with SacRT proved so fruitful that the transit agency launched a fledgling Social Equity Program last year and named her as its full-time head Social Services Practitioner.

The move is part of a notable expansion of SacRT’s role in the community, that prompted SacRT officials to conclude the agency has a broader responsibility to its riders and to the community in dealing with social and economic dislocation issues.

“We realized there was more. More we could do beyond the enforcement model,” said Lisa Hinz, a retired Sacramento police captain who serves as the agency’s Vice President of Safety, Security and Customer Satisfaction.

The agency recently signed an agreement with the City of Sacramento and others to turn an unused portion of property near its Roseville Road Station into a safe zone for people living in their cars or vans.

The agency allows youth from transitional kindergarten to 12th grade to ride free on all buses and light rail trains during summer as well as during the school year. The RydeFreeRT program is aimed at helping working class families, and in turning young Sacramentans into tomorrow’s adult riders.

SacRT provides transportation for unhoused and other vulnerable individuals, including senior citizens heading to cooling shelters in summer, warming shelters in winter, and to local and state emergency housing at hotel rooms.

SacRT also recently created a team of “transit ambassadors.” The ambassadors take a more customer-centric approach to fare evaders. If a rider is not able to show valid fare, the Transit Ambassador will take the time to educate and assist the passenger on obtaining a ticket or pass. When ambassadors find a non-paying passenger who expresses a desire to improve his or her life, they connect the person to Arteaga.

SacRT officials say Arteaga is a great fit for the new outreach role. “The community loves her. The police officers love her,” Hinz said. “I even see SacRT employees asking her for guidance.”

On the streets among the unhoused, Arteaga exudes warmth. She listens more than she talks. She knows dozens of unhoused people by name. She offers hugs to some of those she knows well.

Arteaga knows something about being on the fringes of society. She immigrated with her family to the United States when she was 10 and had to learn a new culture and a new language in order to work her way into the mainstream. It took perseverance, and it gave her a desire to help others.

She’s a saleswoman when she senses the right moment. “I tell people you might just go to the housing program and try it out and if it doesn’t work for you, it’s OK. But try it out. Give yourself that opportunity.”

One man who repeatedly declined her overtures, telling her he was perfectly content in his tent, recently said OK, he’d give it a try. He now has a job and an apartment. “He’s actually following through!” Arteaga said with delight in her voice. “The last time I saw him, I reminded him: ‘Remember when we first met? It was no, no, no.’ That is why we just keep going out.”

“The work SacRT is doing is really vital in the community,” said Marcel Simental of Sacramento Self-Help Housing. He calls Arteaga a dogged and caring social worker, and gives SacRT kudos for seizing the moment by expanding its mission.

“We need more of that across the board from all programs in the city,” he said.

Transit’s angel of the rails: ‘She cares, she really cares’

For some, Arteaga is nothing less than the angel of the rails. Among them is Lance Essex. Essex was living in an abandoned building in Del Paso Heights when SacRT’s new “transit ambassadors” caught him riding without a fare and suggested he meet Arteaga. She supported his efforts to get clean and sober, find housing and get a minimum wage job.

“First thing, she sat down and listened to my story and found out what was going on with me,” Essex said. “You are like a nonentity out there when you’re homeless and the truth be told, she cares, she really cares.”

She recently dropped by his group home to give him free bus passes to get to work. Essex was appreciative. “You’ve been getting me to work since I started over there!” he enthused. “You know what I mean? I wouldn’t be where I am today without your help.”

Another client, Patricia Culpepper, began meeting with Arteaga after Culpepper, who was homeless at the time, had run-ins on buses. Arteaga connected Culpepper with disability rights advocates, and has helped Culpepper deal with her emotions, which stem from trauma and mistreatment Culpepper has experienced, Arteaga said.

“I thank God for her. When other people just said ‘I’m sorry for you,’ Rose stepped in,” Culpepper said. “Sometimes when I am down, I can call her and she’s always going to give me something to pick me up. We need more people like her.”

SacRT reducing homelessness, a person at a time

But there are far more tough cases than easy ones. That includes a wiry middle-aged man in a tank top with an unruly head of hair named Paula (a male name in his south Pacific home country) who lives with a pit bull near the tracks along Folsom Boulevard. Arteaga approached him on a recent weekday. She was accompanied by a SacRT police officer, but the officer stood at a distance, out of hearing range, giving Arteaga space to work.

Paula and Arteaga huddled together talking for a few minutes. Arteaga has not yet been able to penetrate his armor. A SacRT observer – who was shadowing Arteaga for a day – joined to ask Paula if he can see a day when he might let Arteaga help him. Paula’s head remained down; his voice muffled. “Time will tell,” he said. He left it at that. But Paula knows Arteaga will be back. She will ask Paula how he is doing. She will bring water for his dog and talk about opportunities for a more sustainable life.