The Sacramento Regional Transit District (SacRT) has been awarded the Transportation Security Administration’s (TSA) Gold Standard Award for its transit security and emergency preparedness programs. This prestigious award is the highest recognition TSA can give to a transit agency for achieving top scores during an annual review of 17 categories of security and emergency preparedness elements. Out of the 6,800 public transit agencies the TSA oversees, SacRT is one of only four nationwide to receive this recognition this year. SacRT was presented the award during the SacRT Board of Directors meeting on January 23, 2023.

“TSA is pleased to recognize SacRT for achieving excellence in its transit security and emergency preparedness programs. The Gold Standard Award symbolizes SacRT’s commitment to its customers, its adherence to core principles and its leadership in mass transit security,” said TSA Assistant Administrator Sonya Proctor, the agency’s lead official for surface security. “We are proud of the strong partnership between TSA and SacRT and commend them on their continued commitment to transportation security.”

“The safety and security of our passengers and employees is our top priority every day,” said Henry Li, SacRT General Manager/CEO. “We are honored to be recognized for our hard work and commitment to strive for the highest level of excellence.”

“SacRT is a regional pillar, ensuring that our neighbors can get where they need to go in a safe and efficient manner,” said Congresswoman Doris Matsui. “The TSA Gold Standard Award is a well-deserved recognition – showcasing SacRT’s commitment to their riders by prioritizing their safety and security. I applaud SacRT for continually going above and beyond for our community.”

“Congratulations to SacRT for being recognized with the Gold Standard Award – one of only four transit agencies nationwide to receive this prestigious award for security this year,” said Congressman Ami Bera, M.D. “SacRT continues to be a national leader in transit security and emergency preparedness, and its implementation of innovative security programs has ensured the safe and secure transportation of Sacramento-area riders for decades.”

“I’m thrilled. This is a big deal. The fact that we have gotten this twice is illustrative of the changes we have made to make our system clean, safe and convenient. This is an example of how we are looked at as a leader in the industry,” said SacRT Board Chair Patrick Kennedy.

TSA has oversight of 6,800 public transit agencies in the country. Every year, the TSA assesses a select number of transit agencies nationwide for evaluation through its Baseline for Security Enhancement (BASE) program. A select few achieve scores high enough to receive the Gold Standard Award.

In the most recent round of BASE evaluations, TSA reviewed 108 transit agencies. This is the second time SacRT has earned the Gold Standard Award, the first award was in 2019.

SacRT has substantially upgraded its overall safety and security operations in recent years, creating a sophisticated multi-faceted system that includes a 24-7 Security Operations Center (SOC) where SacRT crews monitor over 1,000 live-feed video cameras throughout the bus and rail system. SacRT has several thousand security cameras in use, many of them video cameras, on buses, light rail trains, at all light rail stations and at other SacRT facilities.

The SacRT SOC is operated in a shared facility with the Sacramento Police Department’s security operations center, and can be jointly used by police and SacRT as a command center during emergency operations. 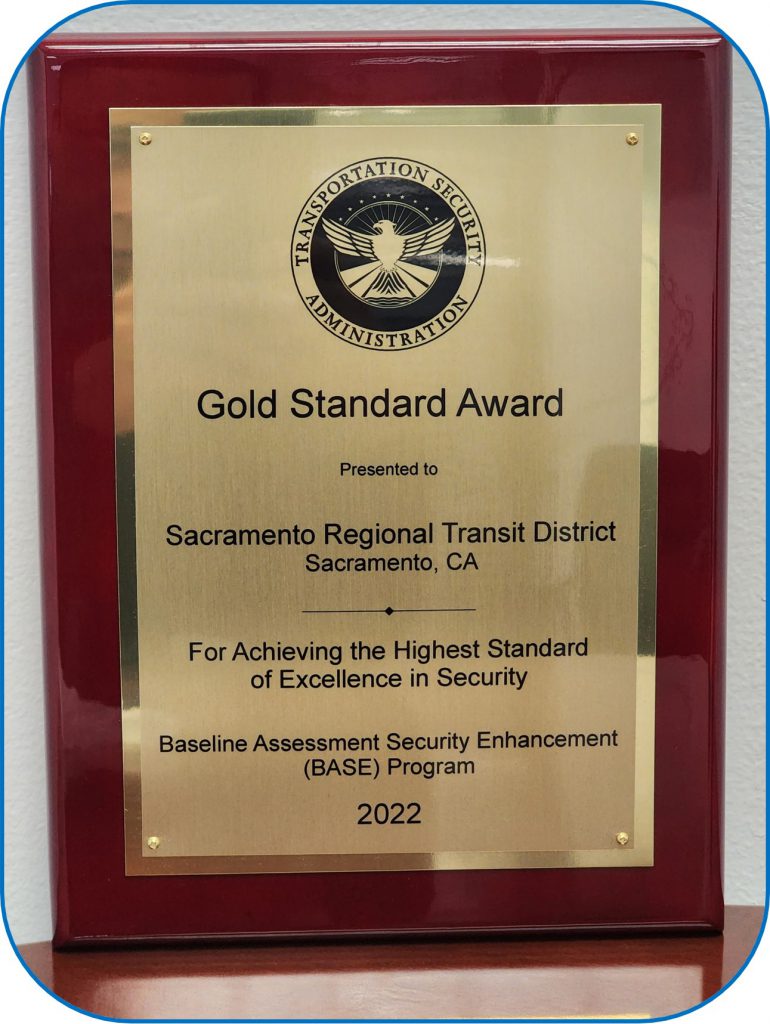