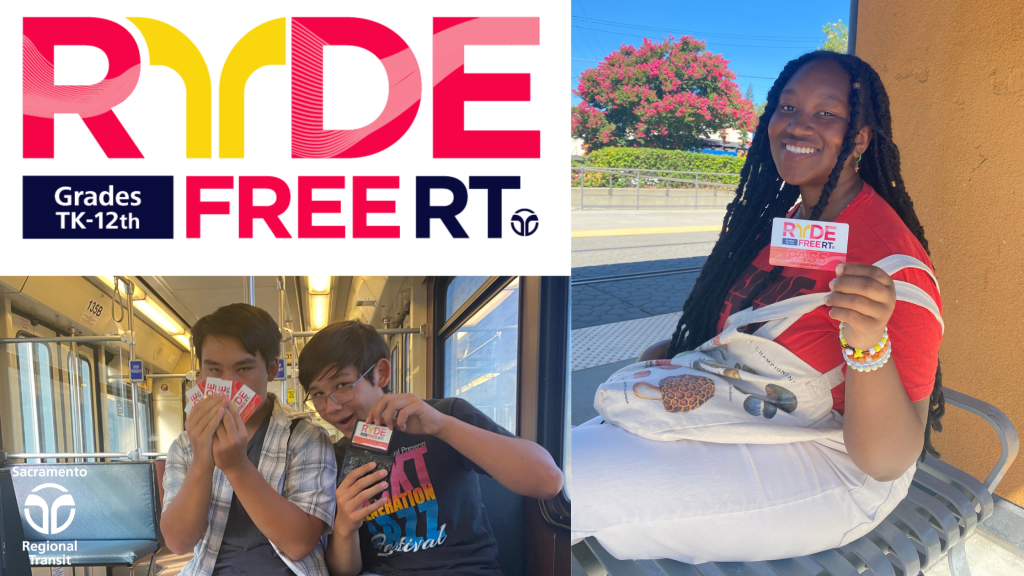 To Schenirer’s delight, but not to his surprise, Li said yes. Li already had been pushing the transit agency to be innovative and entrepreneurial. The new program would allow students to ride not only to school, but to after-school and weekend activities. And not just during the school year, but year-round.

No other transit district in the country had yet implemented such a sweeping free ride program for students/youths. But Schenirer, Li and SacRT directors felt the moment was right for SacRT to take a leadership role in addressing growing social and economic inequities. Free rides would make Sacramento more inclusive by eliminating transportation barriers for families with school-age children.

“It’s about valuing our young people and giving them the ability to be part of our society,” said Schenirer, who represents District 5 on Sacramento’s City Council. “It’s about getting them to school and to jobs, helping Sacramento families financially, and reducing absenteeism.”

The RydeFreeRT program – students came up with the title – was launched in the fall of 2019, leading to an instantaneous surge in youth ridership on SacRT buses and trains.

City councils and school districts around the county jumped in to help SacRT finance the program. Prior to that, students and their parents paid up to $240 a year for transit passes.

“What we are doing is filling an important gap” and introducing a new generation of riders to transit, Li said. “Research shows that people who ride public transportation at a young age are more likely to use it as adults.”

A subsequent University of Texas study corroborated that, determining that RydeFreeRT appeared to quickly improve transit ridership and student attendance and “has a potential to create a new generation of public transit riders.”

Fast forward to fall 2022, as the COVID pandemic winds down and more students head back to classes:

RydeFreeRT project manager Casey Courtright said the agency appears poised to have the biggest year yet for its groundbreaking program. “We anticipate that ‘year four’ will carry more students than ever.”

SacRT provided some 2.5 million free rides to students last year. Courtright said it is difficult to determine how many actual student riders that equates to, but he estimated the number could top 20,000 students, many taking transit to and from school, others taking it for school and  non-school activities, including jobs.

Courtright said students now may account for 25% of all SacRT riders, a clear sign that SacRT is succeeding in introducing Sacramento’s next generation to the value of transit.

Among them is 16-year-old Kimora Morley, a student at McClatchy High School. She and friends rode light rail this summer from Meadowview into downtown. Being able to ride transit is about more than just getting places, it’s about personal growth, and getting to know her city.

“We want to be independent.,” she said, speaking about her group of teenage friends. “We get excited when we can do something for ourselves. I definitely want to use SacRT more. I’m grateful. Public transit is a privilege.”

Danny Nguyen, 17, and his brother Logan, 15, now use the system frequently, sometimes to help their mother out with shopping. They ride light rail from the Iron Point Station in Folsom to KP International Market in Rancho Cordova to buy specialty groceries, such as udon noodles, gyoza, daikon and chebureki, an Eastern European pastry.

“Our parents are busy. Both work full-time jobs,” Logan said. “We ask her: What do you want for groceries?”

School officials say RydeFreeRT is helping combat absenteeism, which often happens when families lack transportation options to get their children to school.

“Chronic absenteeism is a serious problem for schools, and we appreciate that our partnership with SacRT helps get more students to class every day,” said Brian Heap, spokesman for Sacramento City Unified School District. “The SacRT free bus ride program is a tremendous support tool for the district and our families. We have some middle and high schools where as many as one-third of students rely on SacRT buses to safely get them to and from school each day.”

McClatchy High School Principal Andrea Egan calls the free pass system easy for schools to use and calls the program “a shining example of how (to) put kids first.”

Monica Ruelas Mares at Sac Kids First, an advocacy group for youth in the region, says the free ride program offers another more subtle benefit. It offers a conduit to a better life by getting young people out of their neighborhoods, broadening their horizons by showing them their city.

“This is opening up more opportunities for students in high school to get their first jobs,” Ruelas Mares said. “I love that SacRT is leading and being innovative. It goes hand in hand with what young people are asking for, to practice sustainability and consciousness about climate and using resources.”

As for Jay Schenirer, the SacRT board member and city councilman will be retiring from those posts this year. He said he takes with him a special pleasure in seeing the RydeFreeRT program thrive.

“It will be one of the best things I’ve done in my 12 years on the council,” he said. “Henry believed in it. The board stepped up. The city has momentum on youth issues.”