In 1987, SacRT opened an 18.3-mile light rail system that linked northeastern (Interstate 80) and eastern (Highway 50) corridors with downtown Sacramento. The stations were equipped with mini-high platforms to allow ADA accessibility to the front light rail vehicle only.

Currently, SacRT operates on over 43-miles of track and provides service to 53 stations. Many of the original stations and facilities are still in service and both the technology and design need modernization. This modernization to major facilities includes double-tracking, signal upgrades, station remodeling, and power station replacement, which will improve accessibility and reliability.

SacRT is now in the process of updating the light rail network with its Light Rail Modernization Project. This project will  modernize the light rail system with new low-floor light rail vehicles, updated station platforms and a “passing track” in Folsom.

Installing a second track, or a “passing track,” provides SacRT with the opportunity to modernize its light rail system and increase service to the City of Folsom. The second track will enable light rail trains to operate eastbound and westbound between the Sunrise and Historic Folsom stations with minimal delay.

The construction work will start in winter of 2022.

Construction is expected to be complete by early Spring of 2024. Upon project completion, trains will arrive in, and depart from, downtown Folsom every 15 minutes.

SacRT was awarded $170 million in funding specifically for the Gold Line to modernize the light rail fleet, including the purchase of 44 new low-floor light rail trains, station modifications, and as mentioned above, a “passing track” near Folsom to provide 15-minute service that will provide better accessibility for passengers with disabilities, bicycles, and strollers, and help reduce traffic congestion on the busy Highway 50 corridor.

The majority of SacRT’s existing light rail vehicles have reached their useful life. The new low-floor vehicles will provide easier access at every doorway, a spacious seating design, and large windows for better light and views. They will feature improved accessibility with wider aisles and areas for bicycles. The new low-floor vehicles will increase overall operational flexibility by providing more access to passengers with disabilities.

The new low-floor light rail trains will only use three S700 car vehicles, since there are several city blocks in downtown Sacramento that are not long enough to accommodate four of the S700 vehicles while meeting ADA requirements for the bridge plate to land 8” above the top of the street.

The first low-floor vehicles are scheduled to be ready for revenue service shortly before Summer of 2024. 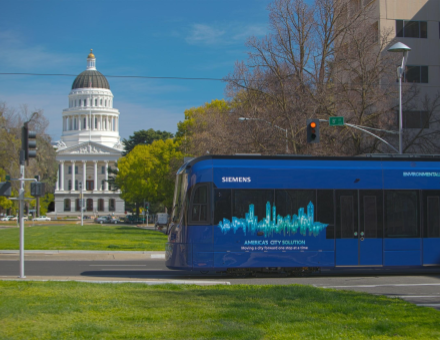 Watt I-80 Transit Center Improvements Project: The transit center improvements include reconfiguring the east and west stairwells to increase visibility and safety, replacing the east and west elevators, and upgrading to the transit center on Watt Ave by enhancing safety, lighting, seating, and widening the bus loading zone. Currently the project is in Final Design with an anticipated design completion of Summer of 2023. CEQA/NEPA has been approved.

Sacramento Valley Light Rail Station (SVS) Relocation Project includes realignment of the Gold Line track and station to a north-south orientation, a center platform, and interim storage tracks along F Street. The relocation is part of the City’s Sacramento Valley Station Area Plan that will connect SacRT to the Bus Mobility Center (Center) to provide a direct connection between the Center and the Airport. The project is being reviewed for environmental clearance and preliminary engineering.

For more information about the project email: modernization@sacrt.com

A public meeting was held to provide members of the public an opportunity to make verbal comments on the Draft IS/MND. The meeting was held during SacRT’s regularly scheduled Board meeting on Monday, December 9, 2019, at the SacRT Auditorium.

A public meeting was held Wednesday, June 20, 2019, at the Rancho Cordova City Hall.

A public meeting was held Wednesday, April 17, 2019, at the Folsom Community Center.